An interview with author Ross Greenwood 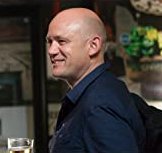 I’m delighted to welcome crime fiction author Ross Greenwood to my Robservations blog. Having recently read and enjoyed The Snow Killer, I offered Ross the chance to tell me a little more about himself and his writing.

Please tell me a little about yourself and your writing.

Hi, I’m 46 and from Peterborough. I’ve been writing since 2015 and my eighth book is out in November.

When did you first realise you wanted to be an author?

I’ve always wanted to write a book, but suspected it would just be one. It’s snowballed since then, along a rather long, gentle slope with many hillocks as opposed to down a mountain!

Describe the first piece you wrote and what it meant to you?

Lazy Blood was my first and as with most people, it bubbled away in my mind for years, five in my case, before I wrote it. It was a joy to eventually hold.

What do you most enjoy about being an author?

The screaming groupies, fast cars and pots of cash.

What do you least enjoy about being an author?

I find it hard to turn off, especially mid book. My wife says i go ‘absent’, sometimes for weeks!

What type of characters do you love and hate to write? Why?

I understand you worked as a prison officer for a number of years. How has this influenced your writing and novels?

Hugely. I was very wrong about what prison is really like. It’s a great place to set stories!

What’s been the biggest influence on your writing so far?

Definitely the prison. I met thousands of people over the four years, both men and women as Peterborough is a dual prison. Lot of writing fodder there! Lot of madness and a lot of sadness.

What inspired you to write the DI Barton series?

I just had (what I thought to be 🙂 ) a great idea to write a book about someone who killed when it snowed. A detective novel seemed the best way to exploit it!

How would you describe your books to someone who has never read one before?

Serious with a sense of humour. A friend calls my Dark Lives books The Prison Misery series.

What’s the best compliment you’ve received about your books?

An eighty year old got in touch after reading Fifty Years of Fear and said he never expected to be surprised at his age, and thanked me for opening his eyes.

Do you have any favourite authors? What is it about them or their work that appeals to you?

If you could invite four guests (fictional or real, alive or dead) for dinner, who would you choose and why?

Kelly Brook, JFK, MLK, and Nelson Mandela. Last three are sadly dead, but I’m sure me and Kelly will get on.

Please tell me about your latest project/plans for the future.

The Ice Killer is out in November. I always planned it to be a trilogy, but Barton has proven popular, so I will probably do at least one more if the demand is there, but I’m going to do a prison one next, with elements that have never been written about before… Duh Duh Durrrrr…

The latest release from Ross is the second in the DI Barton series.

‘Repent in this life, rejoice in the next…’

A murder made to look like suicide. Another that appears an accident. DI Barton investigates the tragedies that have shattered a family’s lives, but without obvious leads the case goes nowhere. Then, when the remains of a body are found, everything points to one suspect.

Barton and his team move quickly, and once the killer is behind bars, they can all breathe a sigh of relief. But death still lurks in the shadows, and no one’s soul is safe. Not even those of the detectives…

How do you stop a killer that believes life is a rehearsal for eternity, and their future is worth more than your own…?

You can find Ross Greenwood at