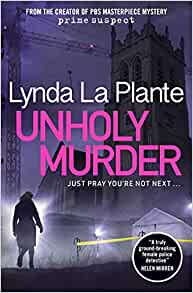 This is the first book I’ve read by Lynda la Plante, though I remember Jane Tennison from the TV show ‘Prime Suspect’, back in the 1990s. This novel is set before that when Tennison is still a detective sergeant.

When a coffin is unearthed on a building site that was once a convent, it looks like an old burial, until forensic examination and a post mortem reveal scratch marks inside the coffin. Murder is soon identified as the cause of death and Tennison starts a complex investigation of an old murder that involves the Catholic Church and a local builder.

It’s well written, dramatic and gripping from the first page to the last. All the main police characters are well drawn, but Tennison is outstanding as a dogged, uncompromising detective who won’t be side tracked. She also has a softer, vulnerable side which can get her into trouble as she mixes business with pleasure.

Emotions runs high, mistakes are made, the hierarchy of the church closes ranks, and Tennison makes as many enemies as she makes friends, but this only adds to the realism and difficulties involved in any murder investigation.

While this is the seventh book in the series, it stands on its own as a first rate police procedural set in the 1990s. I’m off now to enjoy some more of Tennison’s investigations.

A coffin is dug up by builders in the grounds of an historic convent – inside is the body of a young nun.

In a city as old as London, the discovery is hardly surprising. But when scratch marks are found on the inside of the coffin lid, Detective Jane Tennison believes she has unearthed a mystery far darker than any she’s investigated before.

However, not everyone agrees. Tennison’s superiors dismiss it as an historic cold case, and the Church seems desperate to conceal the facts from the investigation.

It’s clear that someone is hiding the truth, and perhaps even the killer. Tennison must pray she can find both – before they are buried forever . . .