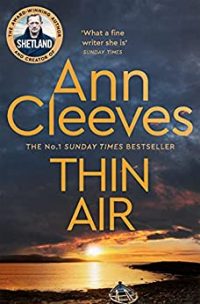 The sixth book in the series is as beautifully crafted as its predecessors, bringing the harsh, but stunning landscape and lifestyle of the Shetlands to life. DI Jimmy Perez is slowly getting back to his old self when Eleanor, a woman from a party of friends disappears. The friends are in Shetland to celebrate the wedding of one of them to a local from the island.

Intertwined with the murder is a myth and ghostly apparition, dating back to the 1920s. One of the group sees the ghostly image of the girl and investigates, certain she is not seeing things. But then this myth was another reason why Eleanor wanted to visit the island.

With assistance from Willow Reeves, a mainland detective brought in to assist, the detectives slowly unravel the myth from the evidence as they inch towards identifying the killer and the motive. Then a second murder brings an added urgency and different perspective on the case, testing the detectives to the limit.

The author has a gift for creating strong, believable characters that you recognise and understand within a few minutes of meeting them. She also knows how to slowly build the tension as the story progresses, drawing the reader in deeper until the twist that reveals the killer.

While this novel can be enjoyed on its own, starting at the beginning of the series will give you so much more understanding and satisfaction as you follow the lives of these ordinary people in extraordinary times.

A group of old university friends leave the bright lights of London and travel to Shetland to celebrate the marriage of one of their friends to a local. But late on the night of the wedding party, one of them, Eleanor, disappears – apparently into thin air.

Detectives Jimmy Perez and Willow Reeves are dispatched to investigate. Before she went missing, Eleanor claimed to have seen the ghost of a local child who drowned in the 1920s. Jimmy and Willow are convinced that there is more to Eleanor’s disappearance than they first thought. Is there a secret that lies behind the myth? One so shocking that many years later someone would kill to protect it?