The Sleeping and the Dead by Ann Cleeves 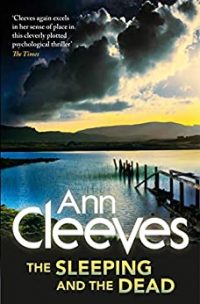 As a fan of Ann Cleeves, I was keen to read this novel, featuring DI Peter Porteus. He’s an interesting character with hints of past trauma, possibly a breakdown, though the truth is never fully revealed. He’s called out to investigate a murder at a local reservoir. Due to the extended drought, the water level has dropped to reveal the body of a young man.

His investigation is a slow, deliberate process that first has to identify the body, which is achieved through dental records. Michael Grey, who was killed when he was a teenager, twenty years before, was an enigma. But as Porteus investigates, he find people who went to school with Michael, including prison officer, Hannah Morton. Apart from the memories of her time with Michael, Hannah faces threats today following a second death.

Linking the past and present deaths to find the killer is a challenge that stretches the police and Hannah.

I enjoyed the novel, the characters, and the difficulties presented by the 20 year old body of someone who didn’t want anyone to know who he really was. It’s atmospheric, the characters sharply drawn to complement the complex, intriguing and well-written story.

If you enjoy Ann Cleeves’ writing, you’ll like this.

Detective Peter Porteous is called to Cranwell Lake where the body of a teenager has been discovered. After trawling through the missing persons files, he deduces that the corpse is Michael Grey, an enigmatic and secretive young man who was reported missing by his foster parents in 1972.

For country prison officer Hannah Morton it is the shock of her life. Michael had been her boyfriend, and she had been with him the night he disappeared. The news report that a body has been found brings back dreaded and long buried memories from her past . . .