The Killing Song by Lesley McEvoy 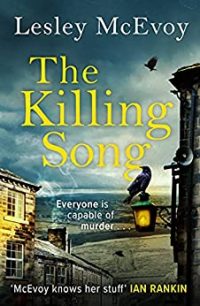 An interesting crime story, narrated by forensic psychologist, Jo McCready, a damaged woman, haunted by her last case. An angry father asks for her help to solve the brutal murder of his son, which remains an unsolved case after the investigation stalled two years ago. At the same time, she’s called in to assist the police with what appears to be a terrorist attack at a train station.

If this isn’t complicated enough, she also has a friend, about to be released from prison after serving time for manslaughter. Throw in some personal issues with one of the main detectives and simmer gently.

It’s a tense, highly charged story which threatens to derail McCready as she picks her way through the various strands of the story. She’s an engaging narrator, constantly pushed to the edge of her abilities by the complexity of the cases and the demands on her time and emotions.

When she finally makes sense of what’s going on, she’s in too deep and forced to confront her worst nightmare, leading to an exciting climax and emotional showdown.

While this is the second book in the series, but works fine as a standalone. It’s well-written and plotted, with an engaging and credible lead character, who struggles to keep all her plates in the air. There’s an intriguing and highly-charged plot, a real sense of danger, leading to a gripping story that’s a welcome change from the usual police procedurals.

On a busy train station platform, a man pulls a knife and viciously attacks another passenger before fleeing – apparently unaware of what he has just done.

To the police, it looks like a terrorist attack. But Forensic Psychologist Dr Jo McCready has seen this bizarre behaviour before, in controversial psychological experiments. She knows this is no random killing spree.

When a botched cold case resurfaces, and the mistress of a controversial billionaire philanthropist is found dead, Jo discovers all these crimes are tangled up in the same web of deadly local secrets. Secrets that some will kill to protect . . .