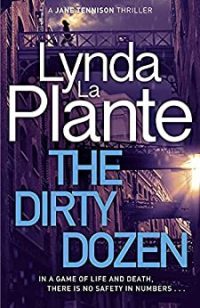 Jane Tennison joins the Flying Squad, or the Sweeney as they’re better known, to become their first female detective. Not that the all-male squad, used to roughing it out with the villains, welcome her.

It’s the late 1970s, when women in the police force were supposed to concentrate on filing and admin, not solving crimes. But Tennison’s made of stern stuff and soon settles into her new job when a security van robbery doesn’t quite go to plan, leading to a shooting. With few witnesses able to identify the masked men, it’s not going to be easy. And despite being put in charge of house to house enquiries, Tennison soon gets a lead.

At times impulsive and confrontational, she doesn’t endear herself to her boss, who’s looking to replace her with a male detective at the first available opportunity. But she’s good at her job, dogged and clever.

Like the previous books in the series, the author gently draws you into the story and then let’s Tennison loose. The characters are sharply drawn, the attitudes spot on for the period and the narrative never lets you drift. There’s always danger with every step Tennison takes, whether it’s from the villains, her boss and colleagues, or her family.

There’s grit, realism, drama and humour in this novel, which keeps you turning the pages as the tension and stakes rise to an exciting climax.

Jane Tennison has worked hard to become the first female detective ever post to the infamous Flying Squad, or ‘the Sweeney’. But the Dirty Dozen is a notorious boys’ club, and Jane’s new colleagues make it clear that they don’t think a woman is up to the dangers of the job.

Dealing with some of London’s most ruthless armed criminals, who think the only good cop is a dead cop, is no joke. Determined to prove she’s as good as the men, Jane discovers from a reliable witness that a gang is going to carry out a massive robbery.

But she doesn’t know who they are, or where and when they will strike . . .