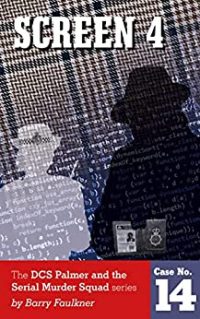 A serial killer is on the loose, killing people in cinemas and leaving no trace. Nothing connects the victims, leaving DCS Palmer and the Serial Murder Squad struggling to make any progress. Then again, the killer is no amateur. Having researched in detail the methods of notorious serial killers in the past, he believes they have all made mistakes that led to their capture.

He doesn’t intend to make any such mistakes, especially with someone as clinical and determined as Palmer. It becomes a personal battle between the two, building to an exciting climax in a cinema, naturally.

As with all the previous books in the series, the easy to read, fast paced story grabs you from the first page. The blend of high tech, dogged police work, humour and a twisting plot keeps you turning the pages until it’s all over too soon.

Another original and exciting addition the series, it can be read on its own. But to enjoy the characters, relationships and humour to the full, it’s worth starting at the beginning.

There’s a serial killer at work murdering cinema-goers in London. Has he done it before? The team uncover a cold case that says he might have but where is he now? As usual with this best selling series the plot twists and turns to the final curtain as Palmer and his team chase shadows.

At home Mrs P has enrolled in Peloton and Palmer’s nemesis neighbour Benji has put a trampoline in his garden just the other side of the hedge to where Palmer’s new fish pond is situated… surely nothing can go wrong….can it?