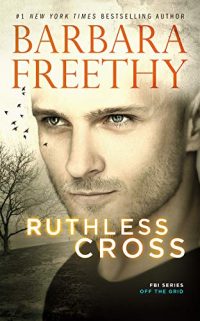 When a federal judge and friend is murdered, FBI Agent Flynn MacKenzie must investigate. While there’s a possible conflict of interest, his knowledge of the art world and the judge make him the best investigator for the job. Naturally, being a romantic suspense novel, he’s going to fall for the girl, Callie Harper, stepdaughter of the judge, making his otherwise complicated life even more complicated.

Did I mention his father was an art thief who ran out on the family twenty years ago?

While it sounds formulaic, the story is told with such heart and emotion, it’s impossible not to be swept along. The main characters are sharply drawn and well-portrayed, with that potent mixture of strength and vulnerability to make them real. While the plot seems to play second fiddle at times to the characters, it soon picks up momentum when Flynn and Callie discover secrets and edge closer to the truth and the murderer.

It all ends with an exciting climax and revelation that keeps you guessing. While I’m sure I’m not the target reader for this type of story, it’s quality story-telling with a high emotional quota that kept me turning the pages to the end.

I thoroughly enjoyed it.

The son of an art thief, FBI agent Flynn MacKenzie is no stranger to deception, but when the brutal murder of a federal judge unravels an intricate and shocking web of lies, he finds himself tangled up in personal life-changing secrets and in the arms of a woman he isn’t sure he can trust.

Callie Harper not only wants justice for her stepfather, she also wants to protect her family. Staying close to Flynn seems like the smart option, until she starts to fall for the man who could hurt everyone she loves.

The lines between good and bad, guilty and innocent, are blurred. Callie and Flynn quickly realize their search for the truth could take them somewhere they don’t want to go…if they can stay alive long enough to get there.