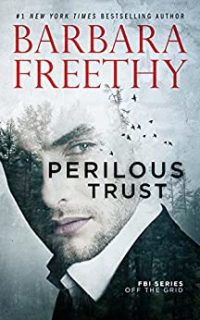 From the opening paragraph, this story drew me in, promising an intriguing thriller which didn’t disappoint. It starts with FBI Agent Alan Parker, leaving a heartfelt apology and message for his daughter, Sophie. Moments later, his car goes off the road and plunges into a ravine.

Was it an accident or murder?

For Sophie, left with a mysterious message that tells her to vanish and trust no one, especially anyone working for the FBI. Naturally, the person who comes to her rescue works for the FBI and is the one she had a passionate one night fling with four years ago.

Can she afford to trust Damon? With the bad guys trying to kill her, she doesn’t have much choice.

They go on the run, trying to work out if Sophie’s father was corrupt or a victim. From here, it’s a journey of discovery and inventive escapes as they outwit the bad guys and learn more about Alan Parker and one of his investigations. The final showdown approaches at pace, leading to an exciting conclusion, where everything is revealed.

The author has a great style that draws you in with sharply drawn characters you care about. Once on board, you’re treated to an exciting mystery and a romance. It’s well-written, engaging and briskly paced, revealing the author’s mastery of her genre.

Looking forward to reading the second book in the series, which will focus on a different character in the FBI unit.

It was one dark night that brought Damon Wolfe and Sophie Parker together. They were two tortured souls, looking for escape, and they weren’t supposed to see each other ever again…

Four years later, Sophie’s FBI father, who is also Damon’s mentor, is killed in a suspicious car crash after leaving Sophie a cryptic message to trust no one from the agency. When Damon shows up looking for her, she isn’t sure if he’s friend or enemy, but she knows he could easily rip apart what is left of her heart.

The last thing Damon wants is to get involved with Sophie again. It was hard enough to walk away the first time. But she’s in trouble, her father’s reputation is under attack, and the lives of his fellow agents are at stake if there’s a traitor in their midst.

When someone starts shooting at them, they have no choice but to go on the run and off the grid. Everyone in their world becomes a suspect. They want to uncover the truth, but will it turn out to be the last thing they expect? Proving her father’s innocence might just cost them their hearts…and their lives…