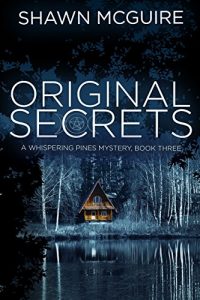 In this third novel in the Whispering Pines series, Sheriff Jayne O’Shea digs deep into the past to investigate a forty-year old death and one much closer to home.

While clearing out the house, Jayne uncovers her grandmother’s journals, which provide a detailed account of how she founded the community of Whispering Pines and how it grew and developed over the years. Jayne finds details of the death of a teenage girl, which appears to be a murder her grandmother covered up for the sake of the new community forty years ago.

Determined to find out what really happened, she interviews many of the people who were there at the time, getting conflicting reports. She also hopes she can shed some light on her grandmother’s recent death, confirmed as murder by an autopsy report she receives.

All the main characters are there from the previous books, bringing the small community to life. Past and present conflicts and differences are brought into sharp focus as Jayne’s investigation uncovers some surprising secrets.

It’s another well written story with vivid and sometimes quirky characters, the charming backdrop of the village and its cultures, and Jayne’s gradual acceptance and seduction into its gentle way of life. The novel resolves some past and current personal issues, providing a platform for Jayne and the series to move into a new phase.

The Northwoods village of Whispering Pines used to be a safe haven for outsiders, but after three deaths in two months, it’s become a hotbed of murder.

Exhausted from being the only law enforcement official on duty, while also trying to open a bed-and-breakfast, Jayne O’Shea welcomes the escape she finds in her grandmother’s journals. Each entry gives her a deeper understanding of why her grandparents moved to the secluded spot so long ago. But as questions are answered, deeply hidden secrets are unearthed.

If Jayne can put all the pieces of this puzzle together, she’ll not only learn the truth behind her grandmother’s death, she’ll catch a killer whose been wandering the village for forty years.