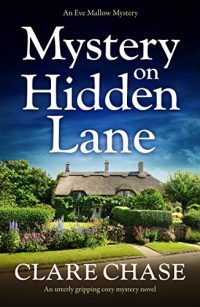 Eve Mallow is a freelance obituary writer who likes to visit the subject’s home and interview those who knew him best. When she arrives in the quiet village of Saxford St Peter, she discovers the subject of her obituary was murdered. While determined to continue with her obituary, she can’t help investigating the murder as well, bringing her into conflict with the local police.

Populated with colourful characters, this is a cosy mystery that gently pulls you along as each discovery Eve makes adds another suspect to a growing list. Her imagination often fills in a few blanks as she searches for the motive behind the killing.

Then a second murder ramps up the tension and puts Eve herself in danger. Being a stranger to the village, can she count on anyone to help her? Who can she trust when so many residents have motives to kill the world famous cellist she’s writing about?

Eve is a likeable, sensible and determined character, who has her own issues to contend with as she digs deeper into the mystery. While she seems to go to a lot of trouble to write an obituary, the story remains interesting and entertaining as it heads for a dramatic climax and reveal.

This is the first book in the series and I’m looking forward to reading the next to see how the author develops Eve through another murder mystery.

When Bernard Fitzpatrick drowns in a river close to his home, the village mourns a tragic accident… and amateur sleuth Eve Mallow is on the case.

Obituary writer Eve is looking forward to her new assignment, as well as spending a few days in the sweet little village of Saxford St Peter, walking the country lanes with her beloved dachshund Gus. But it turns out that it’s Bernard’s death that she’ll need to investigate, not his life. On the day she arrives, news breaks that the world-famous cellist was the victim of a grisly murder. Could this quaint English village be hiding a dark secret?

As Eve starts to interview Bernard’s friends and colleagues, she finds that he’d ruffled more than a few feathers. In fact, from the landlords of the Cross Keys Inn to his own seemingly devoted secretary, there’s barely a person in town who doesn’t have some reason to hate him… is one of the friendly villagers really a cold-blooded killer?

Eve hoped Saxford St Peter would be the perfect escape from her busy city life. But there is darkness even in the most sunlit of settings. And when a second body is found, Eve realises she’s spoken to every single suspect. Her notebook contains all the clues she needs. But will she be able to crack the case and identify them… before they realise she’s on their trail and make her their next target?