Murder of a Lover by Faith Martin 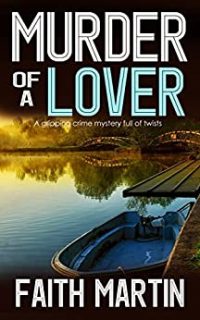 In the 13th novel of the Hillary Greene series, she’s getting used to being a civilian consultant in the cold case team. For her second case, she has another murder to investigate. Rowan Thompson was stabbed to death with a pair of scissors while a student, staying in rented digs with four others and a landlady. While none of them have watertight alibis, neither do any of them have sufficient motive to want to kill the young student.

Hillary’s investigation turns up nothing new, but this is no longer her main concern. Her stalker is growing bolder and more aggressive, despite her attempts to identify him. His presents now contain clues, leading Hillary to discover the identity of three women who have all gone missing.

And as her love life improves, her stalker is not amused.

These consistently entertaining and absorbing novels not only contain a murder mystery to solve, but the backstory always presents challenges and conflicts to deal with, whether it’s the death of colleagues or a stalker. This adds to the depth of interest and enjoyment, making this series compulsive.

If you haven’t tried this series, go back to the start and enjoy!

Ten years ago, Rowan Thompson was found stabbed to death with a pair of scissors in his student house. It turns out that Rowan was quite a lover, with many disgruntled partners left in his wake.

But did any of them have a strong enough motive to murder him?

Meanwhile. Hillary’s stalker is getting more aggressive with his messages and flowers. And it looks like he may be much, much worse than she thought.

Has Hillary finally bitten off more than she can chew?