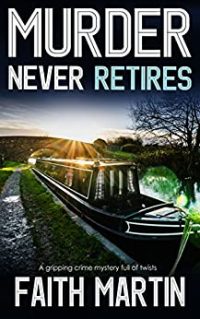 After retiring and travelling the canals for 18 months, Hillary Greene returns to act as a civilian consultant in the Crime Review Team. She’s handed an unsolved murder from 20 years ago and sets about reopening the investigation, ably assisted by a former police sergeant.

It’s not the action packed, rough and tumble she’s used to. And being a civilian, she doesn’t have the powers she once had. But she doesn’t let it affect her as she sets about examining the evidence and interviewing witnesses once more. It’s slow progress, tarnished only by evidence that she has an admirer, who is fast becoming a stalker.

As with all the previous novels in the series, this latest novel has all the sharp characters, conflict and humour that makes the series memorable. There are plenty of references to key moments in the past and some sharp observational humour to underpin the main story. Hillary may be a little rusty, but she soon hits her stride to find the details missed in the original investigation and identify the killer.

The series never disappoints and this novel is no exception, taking Hillary into new, but familiar territory.

Hillary Greene returns to Thames Valley Police HQ, acting as a consultant for the Crime Review Team, looking into murders which the police have never been able to solve.

Twenty years ago, mother-of-three Anna McRae was found beaten to death in her kitchen with a rolling pin. She’d been having an affair with her brother-in-law, so the prime suspect was Anna’s sister Debbie. But the evidence never added up.

However as Hillary digs deeper, more secrets and betrayals emerge. Who wanted Anna dead and can Hillary finally bring her justice?

Meanwhile, Hillary is distracted by an unknown admirer, who quickly seems to be going from suitor to stalker.

Can Hillary solve a fiendishly complex case from the past while fending off unwanted attention?