Murder in Mind by Faith Martin 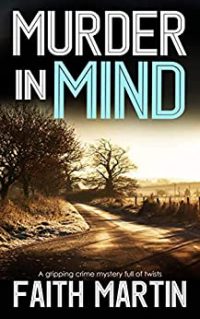 In the 16th book in the series, events within her team occupy Hillary Greene as much as the murder of Sylvia Perkins, an elderly woman with no enemies. It’s another cold case, given to her by her boss and lover, who will be moving to a new job in a couple of weeks.

With all that’s going on around her, Hillary manages to solve the murder within a week. But her concerns for team member Jake won’t go away. While her right-hand man, Jimmy, has been keeping tabs on Jake, neither of them know what he’s up to.

It all adds up to another intriguing and exciting novel, where for once, the backstory seems to take precedence. But that’s the beauty of a series with strong characters that you care about. Can’t wait to find out what happens to all the various strands of the story in the next book.

Seventy-five-year-old Sylvia Perkins was found battered to death in her home in 2010. The murder weapon was suspected to be a fire poker and it seems she was quite popular with older gentlemen.

Her grandson Robbie inherited everything, but he can’t be placed at the scene of the crime.

WHO KILLED THIS HARMLESS OLD WOMAN AND WHY? AND WHAT SECRETS WAS SHE HIDING?

Hillary also has a new boss and a baffling cold case to contend with, not to mention a marriage proposal to consider.