Murder at Midnight by Faith Martin 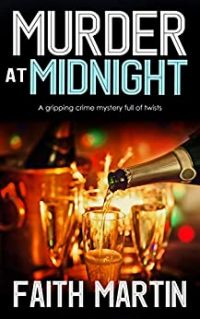 In the 15th book of the series Hillary Greene continues in her role as a civilian officer in a cold case review team. She’s now assisted by two new recruits – a young, enthusiastic Goth and a successful millionaire from the dot.com era, who wants to put something back into society. Or does he have more sinister plans?

That’s part of the appeal of these novels. Alongside the murder investigations, there’s always intrigue in the backstory. Whether it’s Hillary’s relationship with her boss, which seems to be reaching some defining moments, or the new millionaire ‘wonder boy’, as he’s nicknamed, there’s plenty to capture the imagination.

The stabbing of Felix Olliphant at a millennium party defeated the original investigation, which hit dead ends at every turn. Hillary’s review of the case fares no better as the team interview old witnesses and suspects. Then, at the eleventh hour, she makes a breakthrough and solves the murder. It’s a little sudden, but well plotted. The story ends with a welcome note of intrigue, preparing the reader for the next novel.

If you like a cosy mystery with likeable characters, intriguing plots, and a gentle pace, this series is well worth following.

Felix Olliphant was found stabbed to death at a New Year’s Eve costume party for the turn of the millennium. Seemingly liked by everyone, motives for his murder are hard to find. There was one suspect, but no evidence.

Hillary struggles to solve this baffling case. And she has to contend with a new colleague, Jake Barnes. Young and rich, he says he wants to give something back to the community, but Hillary has her doubts.

Will Hillary finally be defeated by this cold case and will she lose her boss and love interest to a new job?