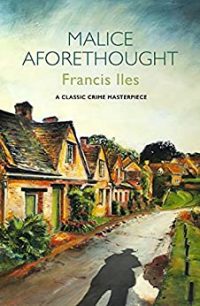 Written in 1931, this is a crime story with a difference. While most authors of the time were writing the classic whodunit, Frances Iles took a more unusual approach. He identified the killer on the first page, allowing the reader to watch Dr Edmund Bickleigh plan and execute the murder of his wife.

While she wasn’t the most likeable woman you could wish to meet, Edmund was a womaniser who had his sights set elsewhere. Quite how he managed to be so appealing to so many women in the village isn’t explained, but the planning and murder are not without their hitches.

It’s like an episode of Columbo, where you watch the killer go about his business, spotting where he will ultimately hang himself, which was indeed the penalty for murder at the time. Edmund Bickleigh is so sure of himself, and convinced he can outwit Scotland Yard’s finest, it’s a joy to watch the frustrations and difficulties that beset him along the way.

With its twists and turns, this story is never less than engaging. Populated with some sharply drawn characters and an intricate plot that turns the traditional murder mystery on its head, this is an entertaining read that still packs a punch and a deliciously ironic twist at the end.

Hailed as a classic, this is English crime writing at its most imaginative and compelling.

Summer. 1930. The hottest day of the year. And Dr Bickleigh has murder in mind.

On a balmy summer’s day in 1930 the great and the good of the county are out in force for the annual, much-anticipated tennis party at the Bickleighs, although not everyone has much enthusiasm for the game. The tennis party exists for other reasons – and charmingly mannered infidelity is now the most popular pastime in the small but exclusive Devonshire hamlet of Wyvern’s Cross.

Which is why, in his own garden, the host, Dr Edmund Bickleigh, is desperately fighting to conceal the two things on his mind: a mounting passion for Gwynyfryd Rattery – and the certain conviction that he is going to kill his wife . . .