Letter from the Dead by Jack Gatland 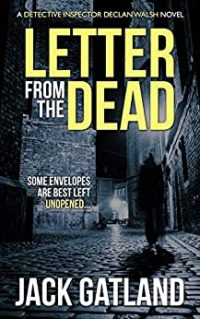 This was an intriguing story, mixing politics, murder and conspiracy into a complex mystery for a cold case squad, known euphemistically as ‘The Last Chance Saloon’. Into the squad steps DI Declan Walsh, ostracised and suspended after a previous case. A letter sent by murder victim, Victoria almost 20 years ago, but never delivered, casts doubt on the conviction of her husband, who died in prison.

Three main characters are involved. Two have left politics, one remains, having switched parties. One has a successful religious channel on You Tube, the other wanders the streets. How did Victoria’s murder change all three lives? What really happened that night when she was pushed off the roof of her house to her death?

Declan Walsh soon discovers his investigation has trodden on some important toes. As he and the squad dig deeper, it becomes clear that one of their ranks is leaking information. When more deaths follow, it’s clear someone isn’t taking any chances.

The characters, particularly Declan Walsh and his boss SCI Alex Monroe, are well portrayed. Both are tough, uncompromising individuals, resolute and driven, with a touch of the maverick to get the job done. The plot is complex and layered, weaving between the three main characters, who have plenty of secrets to keep. Declan Walsh charts an unorthodox course to solve the puzzle, culminating in a Poirot style climax on the rooftop where Victoria was killed.

While I must admit I lost my way a little during the denouement, due to the complexities of the mystery, it didn’t spoil the story, which was hugely enjoyable, fast paced and exciting to read.

An impressive start to a promising series.

“By the time you read this, I will be dead…”

When Victoria Davies was pushed off her stately home’s roof in 2001, all evidence pointed to her husband Michael. But now, twenty years later a letter has appeared, written by Victoria before her death; a letter that was never received, and a letter that brings new suspects into the fray; Labour MPs Shaun Donnal, Andrew MacIntyre and Charles Baker.

But two decades on, life has changed for these men. Donnal is now a paranoid alcoholic living on the streets of London, ‘Andy Mac’ is a popular YouTube Evangelist and Charles Baker is the current Conservative Home Secretary, and the bookie’s choice for next Prime Minister in the upcoming Leadership Election.

Now Detective Inspector Declan Walsh, saved from permanent suspension and newly transferred to the Temple Inn ‘Last Chance Saloon’ Crime Unit, must navigate a minefield filled with political intrigue, adulterous affairs, social activist aristocrats and brutal, bloody murder, as each suspect leads his new team to another problem, and skeleton to fall out of the closet…