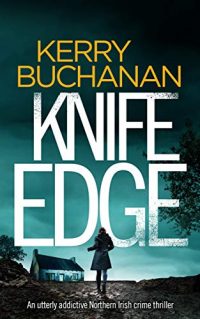 This is a taut, tightly-plotted thriller that twists and turns from claustrophobic tension to dramatic and exciting.

It begins when Nic wakes up in a dark room, bound and gagged, sliced by her abductor’s knife. Somehow she escapes, but the man who was with her has perished. Only it’s not his body in the mortuary when she goes to identify him.

But the killer isn’t finished with her yet, as he lets her know. The police keep a watchful eye as Nic summons her courage to fight back. Only the killer doesn’t play fair. The ensuing game of cat and mouse breaks several police procedural rules in the name of drama, but it makes for an exciting and tense story. At times the tension is palpable as Nic battles her demons.

The tension increases as she homes in on her abductor, who seems to have nine lives as he surprises at every turn in his efforts to capture Nic and then escape the police. Then, just when you think it can’t twist anymore, the author throws in one last surprise.

While I thoroughly enjoyed the story and the sublime plotting, it would have been good to know why the killer did what he did. There were several chapters in his viewpoint, but I never felt I understood his motivation or reasons for abducting and torturing his victims.

Nic always hated clubbing. She only went out that night because she’d promised a friend.

She wakes up, naked and bound in an abandoned cottage in the middle of nowhere. Dappled light comes in through a dirty window. Her body is covered in cuts. Across the room her friend groans in pain.

A shadow passes the window. He’s back. He picks up a knife. He begins to cut her friend. In that moment of bloody frenzy, Nic wrenches free and runs. She’s finally safe. But this is just the beginning.

Detectives Asha Harvey and Aaron Birch arrive at the scene hours later. There is no body, there is no sign of the killer. It’s as if it never happened.