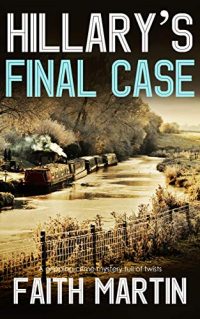 The story continues where the last one finished. Jake, who works for Hillary, is prepared to risk his life to find out what happened to his missing sister. As he could bring down a major criminal in the process, the police decide to use him and the progress he’s made to their advantage.

The Crime Review Team announces it’s revisiting a number of disappearances among local women, many of whom were drawn into prostitution to fund drug addiction. Was Jake’s sister one of these women?

Throw in a change of leadership for the team with a new boss and a change in Hillary’s life, and all the ingredients are there for another riveting story that doesn’t disappoint. While Jake’s story and actions take centre stage, there’s still a murder to be solved and some unpleasant surprises to come.

As with previous stories, the characters and relationships are first rate, the investigations intriguing and twisting, and at the centre, Hillary Greene commands centre stage, taking everything in her stride.

The standard and quality of the writing and storytelling have remained consistently high throughout the series, making the books compelling and always entertaining.

Can Hillary finally close the case of the missing young women?

Can she take down one of Oxfordshire’s most wanted criminals?

Can she handle her new boss?

Can she help one of her team get answers on his long lost sister?

And will she really get married and leave her beloved boat?