Hillary’s Back by Faith Martin 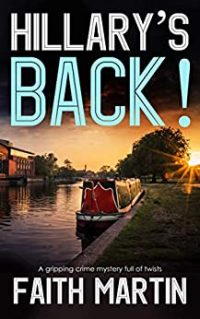 In the 18th book of a consistently entertaining and enjoyable crime series, Hillary’s life has changed. She’s mourning the death of her partner and trying to break in a new recruit to the cold case team. When she’s presented with the unsolved murder of a universally disliked man, she knows she’s up against it.

But Hillary’s made of stern stuff and soon sets about solving the case in her usual, inimitable way.

Without the characters and fascinating backstories of old, it takes a little time to get into the new characters as they settle into their roles. But these are minor niggles in an otherwise entertaining murder investigation.

Eighteen months after Hillary suffered a personal tragedy, she is throwing herself into her work to try to get over it.

The first cold case he works on is the murder of Andrew Feeley.

In 2012, this twenty-one-year-old was found dead in the woods near his home, killed by a single stab wound to the chest from his own knife.

Andrew was extremely unpopular. He was a drug dealer, pimp and bully. His stepdad was one of the main suspects, as they hated each other and often came to blows. Other suspects include Toby Truman and his mother Debbie. Andrew was responsible for getting Toby hooked on drugs.

Given Andrew’s criminal background, his murder is thought to be drug-related.

But Hillary’s not buying it — she knows it’s personal. And a search of the Feeleys’ garden turns up some chilling evidence.