Guardian of Lies by John Pye 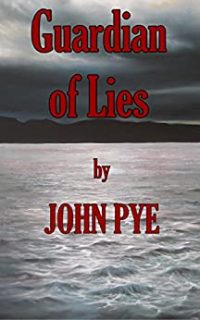 In the third Doug Taylor novel, the death of a former scientist sets off a chain of events that take him into the murky world of the secret services, foreign agents and espionage. At the heart of the story is a simple David and Goliath story as Taylor and his partner, Kim Harding, take on ruthless assassins as they hunt for the location of a formula for a nerve agent that kills within seconds.

Throw an investigative reporter into the mix and the scene is set for a thriller that takes Taylor and Harding the length of Britain, as they try to remain one step ahead of the foes that pursue them and the formula. It’s an exciting thriller that’s made all the more chilling by its basis in many real events

The complex plot has all the surprises and jeopardy you’d expect from a thriller, including an exciting climax off the coast of Scotland. There’s so much going on, there’s little time for characterisation as events plunge the characters into jeopardy at every turn.

It’s a hugely enjoyable journey that never gets out of control. Nor does it stretch credibility as all the events have a disturbing element of realism about them, which result in a memorable thriller.

A death in the family and an unremarkable house burglary suddenly catapult Taylor and Harding outside their comfort zone and into the murky world of the Security Services. The interest of MI5 and connections to a horrible death thirteen years earlier take the two detectives on a bizarre journey to an unknown destination with a frightful history.

A risk-taking journalist uses criminal methods to try to get to the big story first, but has no idea exactly what he is getting into or of the dreadful consequences of his actions.

Foreign agents, espionage and high powered thrilling action take the narrative forward as an issue of serious national security emerges. The fact that the story is based on many real events is all the more breath taking.