Deficit of Diligence by Peter Rowlands 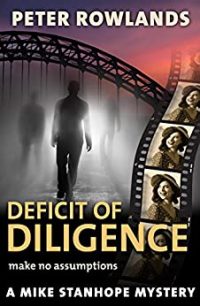 In the second novel of the series, journalist Mike Stanhope has relocated to Cornwall to be close to Ashley and Latimer Logistics. But if he thought the move would distance him from trouble, his investigative nose and impulsive nature lead into more adventures as three separate mysteries pull him to the north east.

A proposed merger soon brings him into contact with Jenna, who likes to tease and provoke, stirring up trouble in his love life with Ashley. Then there are the suspicious companies on the periphery of the merger and suspicions of false accounting. If this isn’t enough to bring Mike into contact with some unsavoury characters, there’s an unexpected bequest from a person he’s never heard of and a legal challenge from a nasty nephew.

It’s all simply another day in Mike’s complicated life, which seems to twist and turn from one danger to another. It’s not as if he’s a hero. He’s more downtrodden and reluctant, but doesn’t like unanswered questions.

It’s another twisting and weaving, multi-layered mystery, laced with humour and wry observation that enjoyable and intriguing as the hapless Mike never quite rids himself of the trouble he’d prefer to avoid.

Looking forward to reading the third novel in the series.

When downbeat journalist and would-be novelist Mike Stanhope learns he’s inherited a house in northern England from someone he’s never heard of, he willingly accepts an assignment that will take him to the area and allow him to investigate. On the alert for clues, he thinks he’s found one in the chance sighting of a young woman in an ancient film.

However, Mike soon has more urgent concerns. Suspicions of fraud, a betrayal of trust and the advances of the boss’s beguiling daughter form a heady mix, and before he knows it, Mike’s job is in doubt and his relationship with his girlfriend is on the line. He struggles to unravel what’s happening, but has a tendency wade into trouble that he doesn’t always see coming. Gradually he realises he’s contending with ruthless people who are determined to keep him in the dark.