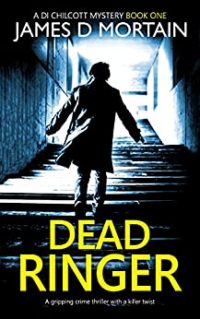 This is the first book I’ve read by this author and it’s a cracker. There’s a serial killer on the loose, killing people at random, or so it seems. After the death of a second woman the local police are struggling to gain any traction. It’s time to bring back DI Chilcott from suspension. After a bitter divorce, he’s now living in a tatty old caravan, which is soon torched and destroyed.

Thrown back into the squad, he’s soon out there, pushing the boundaries until he discovers a connection that reveals the killings are anything but random. From here it’s a pure thriller as Chilcott and his colleagues try to protect other potential targets, while drawing their killer out of the shadows.

The drama and tension were kept high as the pace increased after a steady start. While Chilcott seemed a bit wild at times, his damaged character was well-portrayed and held the whole story together. Someone less volatile or vulnerable wouldn’t have created the impact needed to drive the plot forwards.

They left him for dead. Now he’s back. And he wants revenge.

When the body of a young woman sparks a manhunt on the streets of Bristol, striking similarities to another murder suggest there’s only one detective for the job—old-school maverick cop, DI Robbie Chilcott.

Bitter from a promotional snub and professionally embarrassed by his last failed murder case, DI Chilcott has a chance to restore his pride and get even with a ruthless serial killer. But as the investigation deepens, the realisation dawns that he is hunting a methodical, calculating and brutal enemy.

As the body count rises, DI Chilcott establishes a shocking truth—the victims aren’t random—they are dead because of who they are. Now it’s a race against time to prevent further murders.

Can Chilcott protect the next victims before the faceless killer strikes again, or has he become the next target?