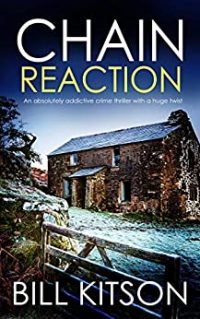 Another intriguing novel in the Mike Nash series begins with the discovery of two severed fingers in a hotel. As the team start their investigation, a spate of muggings demands their attention. Then the team is put under further pressure when several local women are declared missing.

Then two youngsters, using a holiday cottage to get to know each other better, make a gruesome discovery and the pressure ratchets up a few more notches. A brutal serial killer is operating in the area and time may be running out for a fifth missing woman.

Nash also has some personal troubles to contend with, leaving him feeling lonely and depressed. Until he makes a breakthrough in the investigation and it’s all go for a dramatic climax.

While previous novels have been more focused on a single criminal, this one highlights how CID often deal with several investigations at once. The backstory issues also take greater prominence and provide more interest, thanks to the author’s skill in making me care for the characters he’s created.

It all adds up to another memorable novel in this excellent series.

Two severed fingers are discovered by workmen at the Boar’s Head hotel. It looks like they’ve been there some time . . .

Detective Mike Nash must find out what grisly goings-on took place at the ivy-clad, upmarket hotel on the Harland Estate.

ARE THEY CONNECTED TO A SPATE OF BRUTAL MUGGINGS IN HELMSDALE?

Then local women start going missing, and the heat is on for Nash and his team.

Who is terrorizing this quiet market town?