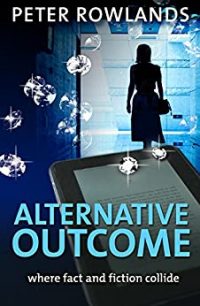 Mike Stanhope is a frustrated trade journalist, who’s written and published a mystery novel that’s based on a true robbery. Little does Mike realise how this novel will come to haunt him when people in the criminal fraternity thinks it’s a true story and want some answers.

This is one of several strands that run through this thoughtful and well written novel. Another concerns Mike’s desire to find a girl he took a shine to on a Cornwall holiday he took with his parents. Then there’s Ashley, who’s romantically interested in Mike. Finally, there’s Rick Ashton, who runs a logistics company that’s overstretched itself.

As the story progresses, Mike finds himself involved in all kinds of adventures and mishaps as the author weaves the various threads into a lively, cohesive story that keeps you turning the pages to find out how it will end.

At its heart, Mike is an unassuming, ordinary guy, who gets caught up in a number of problems that drag him up and down the country in search of answers. It’s exciting, it’s fun and entertaining from start to finish as the story builds to a satisfying climax on several fronts.

If you enjoy character driven mysteries that are a little different from the norm, this is well worth a read.

Alternative Outcome is an intricate mystery drama with a romantic thread, and its starting point is self-publishing. What if you published a book on the web, and it had unintended consequences? What if people who read it jumped to conclusions about your knowledge of real events?

The leading character, Mike, has written a mystery novel as a diversion from the rat race of his day job, basing it very loosely on a true story. He opts for self-publishing as a way to get the book out there, and a sequence of unsettling events follows.

One of the key characters in Mike’s book is loosely based on a girl he remembers from childhood. He never kept in touch with her, but now he is persuaded by well-meaning friends to try and track her down. Yet the harder he looks, the more intrigue he finds himself unravelling.

As he starts piecing together the real mystery surrounding the missing girl, he finds himself pitched against increasingly persistent adversaries. Mistaken assumptions lead him down various false trails, but he gradually starts to unearth some surprises he wasn’t expecting.